We are very proud to have Jack as our candle maker. Jack does a fantastic job and works hard to make beautiful candles for you. Anyone who takes pride in their work and gives 100% deserves recognition and Jack is no exception. We would like to share Jack’s story with you.

Over the years, there have been several educators that believed in Jack and worked hard to make sure he received an academic and social education. A key ingredient to his success was, with the strong support of his family and friends, Jack received the ability to set his own limits. No one told him he couldn’t accomplish something.

Jack enrolled in the Transition to Work program at the Jefferson County Joint Vocational School. There he learned job and independent living skills. Jack also enrolled in the Summer Youth Program where he worked different jobs with the help of a job coach. These experiences allowed Jack to feel the joy of accomplishment.

When Jack entered his job at Upland South Candles, he had the invaluable assistance of a job coach. His coach worked with him on each step of the candle making process. She also helped us find ways to set up our shop to help Jack do his job independently.

If you ever find yourself looking for a hard working, loyal, dependable and honest employee, don’t overlook those with special needs.

We, at Upland South Candles, feel that Jack deserves to be recognized for his accomplishments and the pride he takes in making each candle.

Jack is an inspiration to us and we hope he inspires you too. 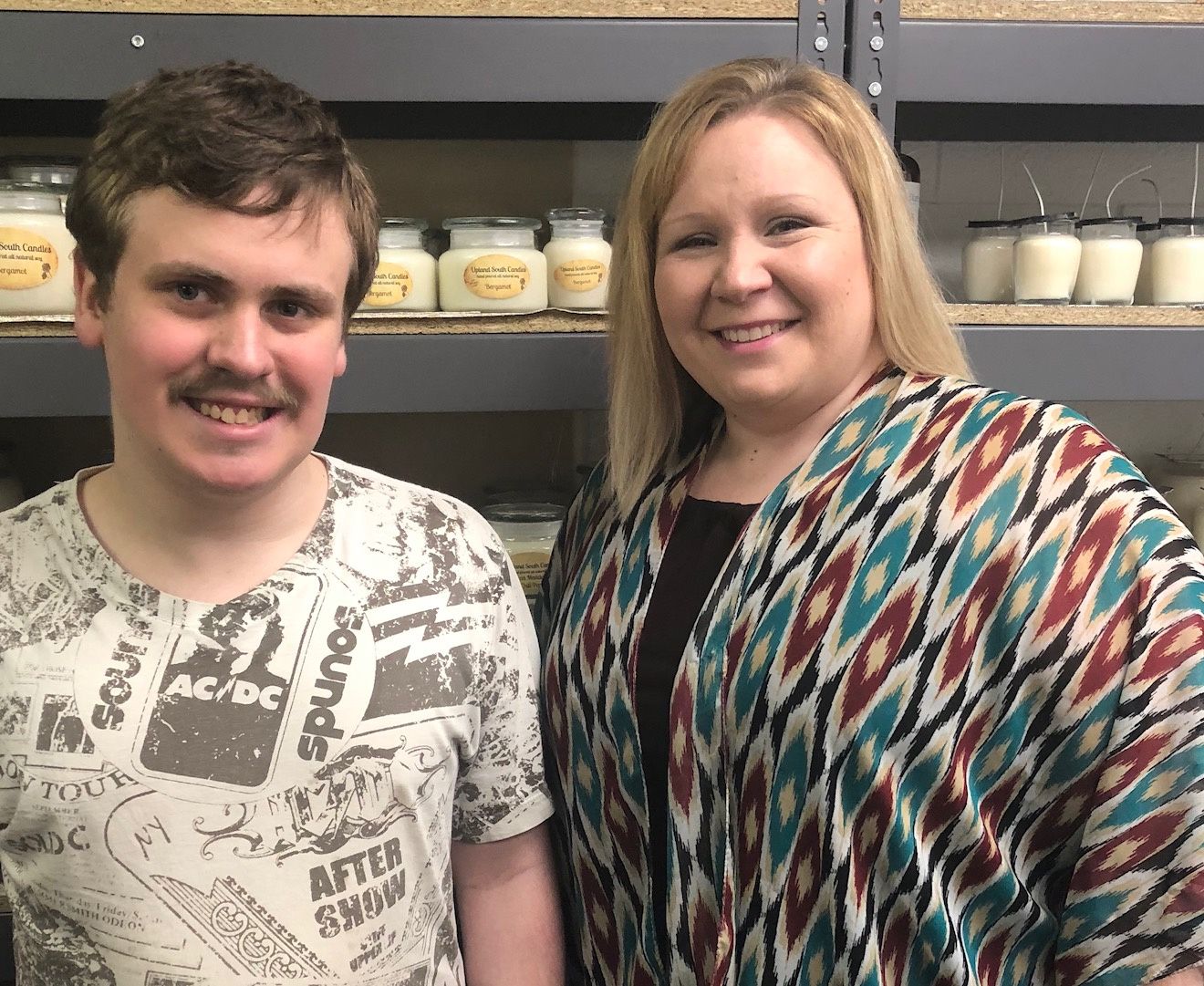 Jack and his job coach, Angela

There, Soy wax candles are great for home decor. Also they are nice candles that are available as hand pure candles. The process is both simple and complicated. The process of making a homemade candle is as well as hard. As a result making a batch of creative candles only takes an hour or so. Regardless of how many you are making, the stuff needed to make them are small. Therefore the clean up is easy as well.

However, making a unique homemade candle can be super tricky. The recipe of how to make hand pour candles has alot of pieces. It’s a great way to make our candles for you. Each piece of your hand pour candles equally as important as anything else.

In addition of candles have a price tag that is very inexpensive. Supplies to make dozens of candles perfect for our customes. Therefore you are not going to be spending a fortune on something that is pretty much a staple of any home.

These creative candles are parts of such an interesting way to do things. That’s why people come to Upland South Candles.

Get creative with candles! Our businesses uses a lot of different things for our candles. Examples of this are mason jars as well as drinking glasses. In addition you can use tins, as well as containers. These containers can be from other candles bought previously. All of the things used by our team are well thought out as well as purchased by our team already. We have autistic candle as well as autism candle for autism.

Now all you have to do is give Upland South Candles a call. Instead of going to anyone else you should be coming to us. In the event that you are in need of these types of things come straight to a good local company that is here for you. Call now.

If you are interested in hiring someone with special needs, contact your county or state agency. In the state of Ohio, contact Opportunities for Ohioans with Disabilities. In Jefferson County, Ohio, you may also contact the Jefferson County Board of Developmental Disabilities – Community Employment Services.
Find Out More